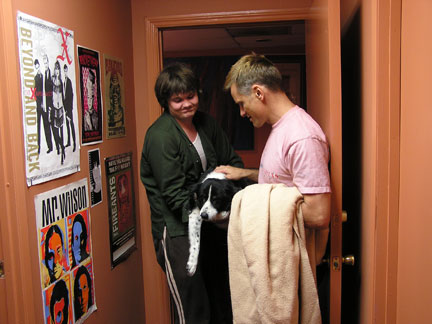 Viggo started working here at TDRS in 1996 when we first worked on "Don't Tell Me What To Do."
A few months later we did our first real studio record, "One Less Thing To Worry About." Some of our first sessions were memorable in that I had come down with a terrible case of the flu. I called before one of the sessions and said I was sick but willing to work but wanted to give him a heads up because I didn't want to give it to him. Viggo being the trooper he is said he would risk it. He came to the session with a big bottle of wine and insisted I imbibe, saying that would take the edge off the flu. I did and it did, working most of the day lit up on wine and flu.
Before the next session, Viggo called me and said he had the worst flu he could remember. Ha! Welcome to TDRS.
This was the start of one of my favorite record-making collaborations and a valued friendship that will soon reach 20 years. Very rare in this business. This session is also important because it was for this record that Viggo first invited Buckethead to come in and play.
Viggo first became aware of Buckethead after we recorded a spoken-word piece and sent it to New York, where it was included on "Myth: Dreams of the World." Behind the recording we had made, Buckethead added guitar. Though I had met Buckethead briefly before, they had not met; but Viggo liked what he heard, and so the session for "One Less Thing" was arranged. We had a great time, the three of us enjoyed working together and it's still one of my favorite Viggo CDs. From then on Buckethead played on most of the Viggo records we did here, and of course a lot of records Buckethead and I did together after that.
We recorded a lot of records, but they were released in small runs; and Viggo has always been a move-on-to-the-next-thing kind of guy, so a lot of these are out of print.
I will list the ones we made. If they are available, I will put a link to the store page. Unfortunately, "One Less Thing To Worry About" -- this first CD we did -- is one that's out of print. A collection of some of those tracks and others from out-of-print CDs was released as "This, That and the Other," which is still available. -- Travis

UNDER THE WEATHER
Viggo Mortensen

Up the river, through the woods, over the mountains, and into the sky. Buckethead, Henry, Travis and Viggo watch the ice break up and the wind move the clouds. Nine songs in all kinds of weather, just to have a good look at the world before it gets dark. Available now from Perceval Press. Running time 41:03

One track with Buckethead and Travis Dickerson playing, but otherwise instruments and vocals by Viggo Mortensen. With titles like "Blacksburg," "Sorrow Acre," "Bomb This" and "Fear's Echo," these soundscapes are not an invitation to drift off to sleep, but neither do they prohibit dreaming. As Poe put it, "Those who dream by day are cognizant of many things which escape those who dream only by night." Recorded in 2007, shortly before the recently released piano CD "Time Waits For Everyone." CD, 9 tracks, nearly 50 minutes of mostly instrumental music.

Time Waits For Everyone

There are pianos everywhere, there for the playing, there for the sound of places, to turn the soil, to uncover the roots of things, as roadmaps to our true motives, instructing, retelling, drawing from us -- with a patience and sincerity we may not always manage on our own -- what is essential about breathing and dreaming, what may really be happening as we run blood through ourselves, share or take it from others, passing into Autumn, only just aware of the trees. -- piano improvisations found in Hungary, Germany, Poland, Russia, and in rememberance of things past. Played by Viggo Mortensen, recorded by Travis Dickerson.

This was a very fun project to work on. It was during the making of the "Lord of the Rings" trilogy and also the middle of the whole post-911 Iraqi turmoil. "PFA" was a reaction to that turmoil. There are a lot of good pieces in this one, from Viggo and from Buckethead. One of the more interesting days was when Viggo brought some of his costars in from "Lord of the Rings" to participate in the recording. All of them were very talented musicians or singers. A very good time was had by all. I remember sitting next to Buckethead; he was playing guitar and I was playing keyboards; everyone was playing something and looking at each other with a kind of "Can you believe we are surrounded by hobbits?" look.
This turned out to be another of my favorites; and because of the fervor surrounding the "Rings," it got a lot of press and is probably the best known of Viggo's records. Below are some photos from the session. -- Travis

A two-disc CD/DVD that documents the reading given by Scott Wannberg, Hank Mortensen and Viggo Mortensen on April Fool's Day 2006 at the Beyond Baroque Literary Arts Center in Venice, Calif. Part of the proceeds from sales will benefit Beyond Baroque.

This seventh full-length musical collaboration between Buckethead and Viggo Mortensen also includes contributions from Travis Dickerson, Henry Mortensen, Walter Mortensen and Bridget. "Intelligence Failure" is a musical ode to the dream of preserving loving, civilized society in trying, often cruel times. Rising above the deceit and greed that have plagued and eventually conquered all the world's empires, there have always been brave individuals and isolated groups that have stubbornly refused to surrender their belief in humanity. This collection is dedicated to them. Combining variations on traditional melodies with original compositions and improvisation, as on previous Buckethead/Viggo recordings, this CD also draws from freely available statements by public figures to tell a part of the story of our time. Sometimes humorous, sometimes heartbreaking, "Intelligence Failure" is never anything less than fully committed to an honest examination of where we are, and to expressing hope for where we might go.

The fruit of another Buckethead/Viggo collaboration, this is the story of a single "long night's journey into day," an eight-part instrumental exploration of dusk to dawn in late autumn. "Please Tomorrow" is a series of haunting but ultimately hopeful soundscapes, rooted in and longing for dreamtime. All fauna and flora, present though nameless, dead or alive, on this CD are real. Also featured are Travis and Henry, veterans of such Buckethead/Viggo recordings as "The Other Parade" and "Pandemoniumfromamerica."

This That and the Other

In response to countless requests to reissue earlier Buckethead/Viggo material, much of which is no longer available, Perceval Press offers this nearly 44-minute compilation of remastered selections from five different CDs, along with three new unreleased tracks. Included are selections from "One Less Thing To Worry About" (1997), "The Other Parade" (1998), "One Man's Meat" (1999), "Pandemoniumfromamerica" (2003) and "Please Tomorrow" (2004). The three new tracks are called "This That and The Other." This CD is dedicated to any and all trees, living or dead, inhabited or not.

Don't Tell Me What To Do

This was the first project Viggo and I worked together on. It was recorded and mixed during a live broadcast of Liza Richardson's "Man in the Moon" on KCRW (89.9 FM), Santa Monica, Calif., Sept. 10, 1993. Viggo and I assembled and mastered it here at TDRS. It was released on Action Box Records and I believe is out of print. -- Travis

One Less Thing To Worry About

This is really the first proper CD we did. As mentioned above, it's how Viggo, Buckethead and I met and first started working together. -- Travis

This is really the first proper CD we did. As mentioned above, it's how Viggo, Buckethead and I met and started working together. -- Travis